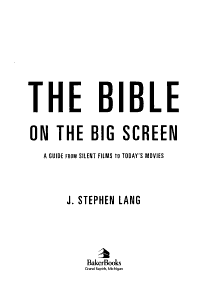 Book Description: Hollywood has been producing biblical movies for over a century. Starting with mini-Passion stories from the 1890s, bestselling author J. Stephen Lang takes readers through blockbusters and busts, miniseries and Mel Gibson, covering film plots and characters based on the Bible. More than just a list, The Bible on the Big Screen gives movie buffs film credits, running times, and release dates and answers intriguing questions about motives for making the movies, critics' reactions, and much more. It also offers a comprehensive filmography with a chronological listing of all biblical movies ever made, and if they are available on video. 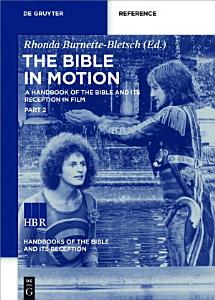 Book Description: This two-part volume contains a comprehensive collection of original studies by well-known scholars focusing on the Bible’s wide-ranging reception in world cinema. It is organized into sections examining the rich cinematic afterlives of selected characters from the Hebrew Bible and New Testament; considering issues of biblical reception across a wide array of film genres, ranging from noir to anime; featuring directors, from Lee Chang-dong to the Coen brothers, whose body of work reveals an enduring fascination with biblical texts and motifs; and offering topical essays on cinema’s treatment of selected biblical themes (e.g., lament, apocalyptic), particular interpretive lenses (e.g., feminist interpretation, queer theory), and windows into biblical reception in a variety of world cinemas (e.g., Indian, Israeli, and Third Cinema). This handbook is intended for scholars of the Bible, religion, and film as well as for a wider general audience. 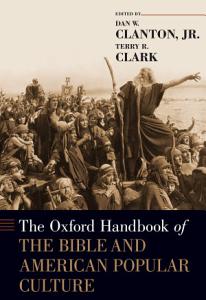 Book Description: "The study of the reciprocal relationship between the Bible and popular culture has blossomed in the past few decades, and the time seems ripe for a broadly-conceived work that assesses the current state of the field, offers examples of work in that field, and suggests directions for further study. This Handbook includes a wide range of topics organized under several broad themes, including biblical characters and themes in popular culture; the Bible in popular cultural genres; "lived" examples; and a concluding section in which we take stock of methodologies like Reception History and the impact of the field on teaching and publishing. These topics are all addressed by focusing on specific examples from film, television, comics, music, literature, video games, science fiction, material culture, museums, and theme parks, to name a few. This book represents a major contribution to the field by some of its leading practitioners, and will be a key resource for the future development of the study of Bible and American popular culture"-- 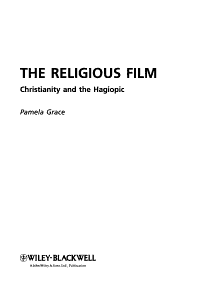 Book Description: Pamela Grace provides historical, cultural and critical background for religious films from the silent era through today, and explores the genre in its many guises - as spectacle, as musical, and as controversy. 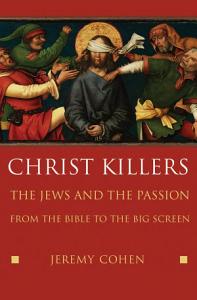 Book Description: Traces the evolution of the image of the Jews as the murderers of the messiah, from its origins to the most recent expressions, drawing on sources that range from the gospel accounts of the crucifixion to film versions of the life of Christ, and assesses the influence of that myth on every aspect of Western culture. 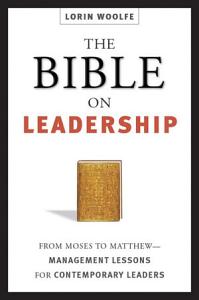 Book Description: Millions have been inspired by the Bible’s spiritual lessons. Now, Lorin Woolfe provides a unique way to view the Bible . . . for leadership lessons that can be applied to our modern business world. Consider David’s courage and innovation in slaying Goliath with just a stone and a sling; Moses’ outstanding ""succession planning"" in picking Joshua; Joseph and the political skills that brought him to the seat of power; and of course, Jesus’ compassion, communication skills, and vision that launched Christianity (a long-term success by any measure). These are leaders among leaders. Their achievements -- and their inspired methods of achievement -- offer a wholly different perspective on business leadership. For the dozens of Biblical stories presented, the book provides: * A concise retelling of each story * One (or more) leadership lessons suggested by each story * Examples of contemporary business leaders who exhibit some of the inspired traits of these ancient leaders, including: Fred Smith of FedEx, Howard Shultz of Starbucks, Tom Chappell of Tom’s of Maine (a “toothpaste with a mission”), Roy Vagelos of Merck, and many more. The chapters cover these universal topics: Courage * Purpose * Communication * Honesty and Integrity * Power and Influence * Performance Management * Team Building * Humility * Compassion * Justice * Encouragement and Consequences * Wisdom * Creating the Future Each topic concludes with a list of key points to keep in mind as readers continue on their own leadership journeys.

Book Description: This unique dictionary not only identifies terms and biblical figures but also examines them from the perspective of reception historythe history of the effect the Bible has had on its readers. Biblical books, passages, and characters certainly played important roles in the history of Judaism, Christianity, and Islam, but also influenced other major religious traditions as well as preachers, writers, poets, artists, and filmmakers. The study of such cultural effects of the Bible is an emerging field, and this reference work promises to open new avenues of exploration.

Book Description: Contains 105 essays that examine the role of religion in North American society from the time of Native American tribal cultures to the age of the electronic church. Organized by topic, with cross references, bibliographies, and a detailed index. 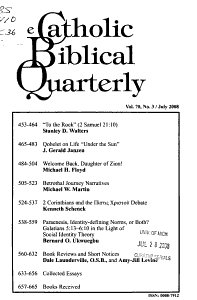 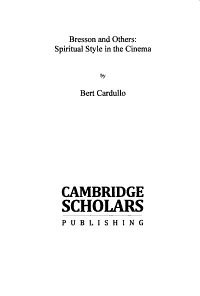 Book Description: A number of writers have attempted to capture Robert Bresson's style as well as his substance with such terms as minimalist, austere, ascetic, elliptical, autonomous, pure, even gentle. Most famously, Paul Schrader once called Bresson's films transcendental, while Susan Sontag described them as spiritual. Both these critics thus extended in anglicized form a tendency that had early been dominant in Bresson criticism in France: the attempt, made by such Catholic writers as Andre Bazin, Henri Agel, Roger Leenhardt, and Amedee Ayfre, to understand Bresson's work in religious terms, seeing his camera as a kind of god and the material world as (paradoxically) a thing of the spirit. That attempt, in Sontag's essay, led to the introduction of Bresson to the New York-based avant-garde of the 1960s and 1970s, whose films-such as Richard Serra's Hand Catching Lead (1968), for one-show the influence of the French director's severe, reductivist style. Jean-Luc Godard, of course, needed no such critical introduction to Robert Bresson, for, in his iconoclasm and integrity, in his rejection of the Gallic Cinema du Papa as well as in his embrace of film as an independent art, Bresson was one of the heroes of the young directors who constituted the French New Wave in the early 1960s. So much so that Godard was moved to say in Cahiers du cinema in 1957 that Bresson is French cinema, as Dostoyevsky is the Russian novel and Mozart is German music. The result is that Bresson has undeniably influenced a slew of contemporary European filmmakers, including Chantal Akerman, Olivier Assayas, Laurent Cantet, Alain Cavalier, Jean-Pierre and Luc Dardenne, Claire Denis, Jacques Doillon, Bruno Dumont, Michael Haneke, Benoit Jacquot, and Maurice Pialat--not to speak of his influence on Asian and American cinema. Bresson and Others: Spiritual Syle in the Cinema is an attempt to document this influence through essays on fifteen international directors who followed in Bresson's wake, who in fact may have influenced him (Carl Dreyer), or who contemporaneously worked veins similar to those found in Bresson's films (Ingmar Bergman, Yasujiro Ozu). These essays are preceded by an introduction to the cinema of Robert Bresson and followed by film credits, a bibliography of criticism, and an index. The subject of Bresson and Others, then, may specifically be Bressonian cinema, but, in a general sense, it could also be said to be spirit and matter--or film and faith.