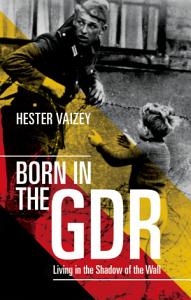 Book Description: The changes that followed the fall of the Berlin Wall in November 1989 were particularly dramatic for East Germans. With the German Democratic Republic effectively taken over by West Germany in the reunification process, nothing in their lives was immune from change and upheaval: from the way they voted, the newspapers they read, to the brand of butter they bought. But what was it really like to go from living under communism one minute, to capitalism the next? What did the East Germans make of capitalism? And how do they remember the GDR today? Are their memories dominated by fear and loathing of the Stasi state, or do they look back with a measure of fondness and regret on a world of guaranteed employment and a relatively low cost of living? This is the story of eight citizens of the former German Democratic Republic, and how these dramatic changes affected them. All of the people in the book were born in East Germany after the Berlin Wall was put up in August 1961, so they knew nothing other than living in a socialist system when the GDR fell apart. Their stories provide a fascinating insight not only into everyday life in East Germany, but about how this now-vanished state is remembered today, a quarter of a century after the fall of the Wall.

Book Description: A history of private life in the German Democratic Republic, showing how the private sphere assumed central importance in the GDR from the very outset, and revealing the myriad ways in which privacy was expressed, staged and defended by citizens living in a communist society.

Book Description: First published in 1998, this volume joined the effort to understand the former German Democratic Republic, with the aim of reaching a better understanding of the psychologically painful process of German reunification following the collapse of East-German communism in 1989. While born illegitimate and artificial, the country determined the lives of millions of people, despite having now disappeared from the map. This study from Joanna McKay incorporates previously unavailable archive material and focuses on some of the most challenging, ever-present tasks for the GDR leaders. In particular, she examines how they approached explaining the division with West Germany without undermining the legitimacy of the GDR. 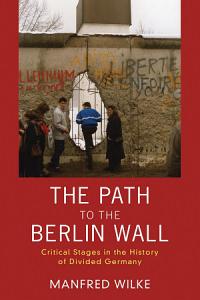 Book Description: The long path to the Berlin Wall began in 1945, when Josef Stalin instructed the Communist Party to take power in the Soviet occupation zone while the three Western allies secured their areas of influence. When Germany was split into separate states in 1949, Berlin remained divided into four sectors, with West Berlin surrounded by the GDR but lingering as a captivating showcase for Western values and goods. Following a failed Soviet attempt to expel the allies from West Berlin with a blockade in 1948–49, a second crisis ensued from 1958–61, during which the Soviet Union demanded once and for all the withdrawal of the Western powers and the transition of West Berlin to a "Free City." Ultimately Nikita Khrushchev decided to close the border in hopes of halting the overwhelming exodus of East Germans into the West. Tracing this path from a German perspective, Manfred Wilke draws on recently published conversations between Khrushchev and Walter Ulbricht, head of the East German state, in order to reconstruct the coordination process between these two leaders and the events that led to building the Berlin Wall. 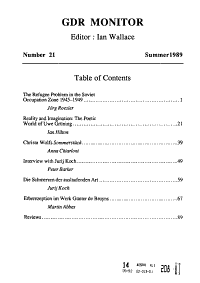 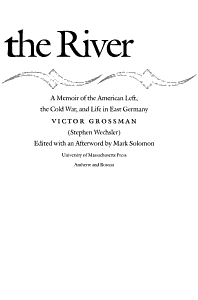 Book Description: Faced with an accusation from the US Army's highest legal authority in 1952, Grossman left his unit stationed in Bavaria and swam the Danube to East Germany. He traces his childhood and experiences as a student, worker, and soldier; then describes life in his new home among a surprisingly large community of defectors. There is no index. Annotation (c)2003 Book News, Inc., Portland, OR (booknews.com). 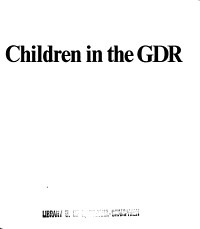 Book Description: Four East Germans corresponded for decades with an American teacher, openly sharing about their frustrations, joys, and challenges of living in a communist country. Author David F. Strack kept those personal letters and has now distilled them into a riveting memoir about what life was like behind the Iron Curtain. Read about the lives of Gerhard, Jutta, Jurgen, and Barbara in their own words, as they share about their jobs, families, and political opinions. Learn how the fall of the Wall and the reuniting of "Ost und West" affected their lives, bringing wonderful freedoms to all of them, yet also economic disappointment to one. LETTERS OVER THE WALL is an enthralling memoir, chronicling four lives over a span of forty years, during a time of political upheaval and great societal change."

Book Description: Twenty years after the collapse of the German Democratic Republic, historians still struggle to explain how an apparently stable state imploded with such vehemence. This book shows how 'national' identity was invented in the GDR and how citizens engaged with it. Jan Palmowski argues that it was hard for individuals to identify with the GDR amid the threat of Stasi informants and with the accelerating urban and environmental decay of the 1970s and 1980s. Since socialism contradicted its own ideals of community, identity and environmental care, citizens developed rival meanings of nationhood and identities and learned to mask their growing distance from socialism beneath regular public assertions of socialist belonging. This stabilized the party's rule until 1989. However, when the revolution came, the alternative identifications citizens had developed for decades allowed them to abandon their 'nation', the GDR, with remarkable ease. 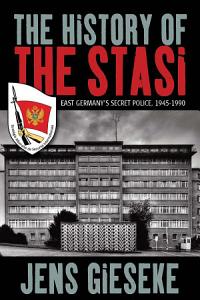 Book Description: The East German Ministry for State Security stood for Stalinist oppression and all-encompassing surveillance. The "shield and sword of the party," it secured the rule of the Communist Party for more than forty years, and by the 1980s it had become the largest secret-police apparatus in the world, per capita. Jens Gieseke tells the story of the Stasi, a feared secret-police force and a highly professional intelligence service. He inquires into the mechanisms of dictatorship and the day-to-day effects of surveillance and suspicion. Masterful and thorough at once, he takes the reader through this dark chapter of German postwar history, supplying key information on perpetrators, informers, and victims. In an assessment of post-communist memory politics, he critically discusses the consequences of opening the files and the outcomes of the Stasi debate in reunified Germany. A major guide for research on communist secret-police forces, this book is considered the standard reference work on the Stasi and has already been translated into a number of Eastern European languages.